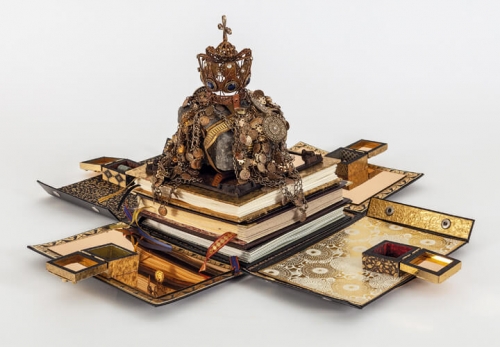 I love sailing on forbidden seas and landing on barbarian shores, 2019

The art of the sculptor and draughtsman Ricardo Brey (b.1955) appears enigmatic at times and yet strangely familiar. In his poetic, richly imagined assemblages he concentrates on the relationship between humans and nature, on cultural identity in his native country Cuba and his adopted homeland Belgium, and on the interaction between different cultures and philosophies. Since 2014 Brey has been developing the project Adrift, which has a strongly existential dimension.

Rather than dwelling on origins, in his work Brey emphasizes “drifting” with its associated transitions and disjunctures. In this group of works, the artist jumps between assemblages, drawings, and photographs. Brey—a seasoned Documenta and Biennale exhibitor—does not make things easy for his viewers: his multi-layered work presupposes attentive perception and the willingness to set aside conventional interpretative schemas and go in search of clues. This is the artist’s first museum exhibition in Germany. An accompanying bilingual book will be published in cooperation with the Museum De Domijnen in Sittard, the Netherlands, and supported by our friend’s association, the Freundeskreis des Gerhard-Marcks-Hauses e. V.