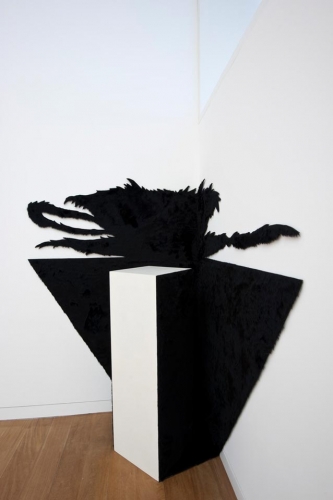 This is an exhibition of contemporary art produced by Brazilian artists. But if the internationalization of art has dissolved regional differences, how can one distinguish between Brazilian contemporary production and that of other parts of the world?

As we know, the notion of “Brazilianness” cannot be defined based merely on a homogenous essence related to geography. What connects certain artists of a Brazilian tradition, beyond the symbolic field with which they interact, are recurrent references to shared experiences, historical moments, social norms, and transgressions. Nevertheless, the artists frequently confront and engage with histories of art from different regions of the globe. The title Passado/Futuro/Presente refers to relationships between the past and the future, created by works of art rooted in a present characterized by an unprecedented diversity and a constant exchange of ideas on an international scale.

Comprising painting, sculpture, installations, photography, video, and performance, this exhibition presents an examination of the work of artists recognized as being pioneers of their generation. The show offers works by seminal artists, as well as several historic anchors from the 1970s which illustrate conceptual continuities and ruptures between past and present. The exhibition is structured around five nuclei with porous borders, allowing visitors to chart their own paths.

The fruit of a partnership between Phoenix Art Museum (Arizona, USA) and the Museu de Arte Moderna de São Paulo, another version of this exhibition was staged in Phoenix in 2017. It was the first panoramic exhibition of Brazilian contemporary art in the American Southwest and the first show of the collection of the Museu de Arte Moderna de São Paulo in the United States. In presenting one of the most important collections of Brazilian art in the world, this exhibition seeks to contribute to the continuing debate about what Brazilian art is and can be, based on the collection of the MAM.