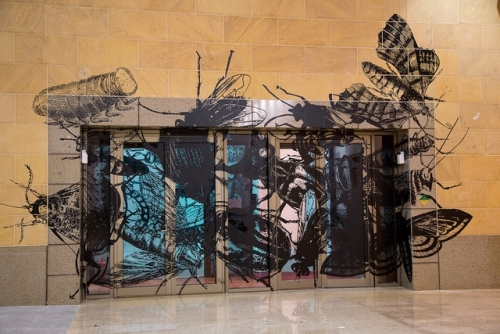 BIENALSUR 2019 arrives in Saudi Arabia with the exhibition Recovering Stories, Recovering Fantasies which, from November 5, will bring together, at the National Museum of Riyadh and in the Diplomatic Quarter, works by 18 artists from different countries, in an unprecedented cultural association that will close the second edition of the biennial, inaugurated last May in the Argentine city of Ushuaia.

The presence in Saudi Arabia is part of the dialogues, for peace and international integration through art and culture of which BIENALSUR is part in the world. It will be the first time that an exhibition of visual arts, designed to converge with other ways of thinking, is presented to the Saudi public.

In the public space of the city, specifically in the Diplomatic Quarter of Riyadh, the End of the World Flags, made by Christian Boltanski (FRA), Voluspa Jarpa (CHL) and Magdalena Jitrik (ARG), based on the project Draw Me a Flag created by Boltanski for the Fondation Cartier, will be installed near the sculptural benches of the Argentine Pablo Reinoso and the installation of Betsabeé Romero who, with her toy horses, evokes countless historical narrations.

After a simultaneous deployment of its unique cartography across the globe, with exhibitions by 400 artists in more than 100 venues - with which it works jointly and collaboratively - from 43 cities in 23 countries, BIENALSUR closes its 2019 edition in the city of Riyadh, capital of Saudi Arabia, faithful to its conviction of multiplying voices and consolidating a multicultural, polyphonic and horizontal network.

The exhibition, with a large majority of female artists and also curated by a woman, the outstanding Argentine researcher, Diana Wechsler, artistic-academic director of BIENALSUR, offers the viewer, in her own words: "the opportunity to recover the imaginary dimension and with it converge with other ways of thinking, which can expand the narrating modalities in that interstice that exists between reality and fantasy”.

In a room of a thousand square meters, the layout of the works will emulate a kind of labyrinth, as an invitation to the public to get lost in the fantastic nooks of the stories displayed, and which turns each of these pieces into a Sherezade of contemporary art, both in the images filled with giant insects by Regina Silveira, or in the disturbing landscape "The silence of the sirens" by Eduardo Basualdo or in the magical floral installations by Makoto Azuma.

The public will be able to attend the peculiar stories told by Laurent Grasso, be surprised by the spatial drawings by José Bechara and Marco Maggi, or feel lost in space with the video installation by Graciela Sacco, or Paola Monzillo's textile piece that the artist makes with maps.

Considered a pioneer of conceptual art in the Middle East, Arab artist Faisal Samra will present his work "Grip of Hope", an interactive installation in which the viewer must take a fragment of clay dried in the sun, squeeze it with a closed fist and place it to dry on The wall of desires, a metaphorical gesture to preserve the essential elements of life: water, earth, sun and air.

The exhibition will be joined by pieces that reflect the singular experience of time from the point of view of the artist Ayman Zedani, the narrations of Sarah Abu Abdallah, the intimate world of Fatima Al-Banawi (writer, actress and artist who collects real-life stories from anonymous people and turns them into performances), and the imaginary of Mariana Telleria, a giant boat that seems to have been trapped there.

The exhibition is supported by the Ministry of Culture of Saudi Arabia.