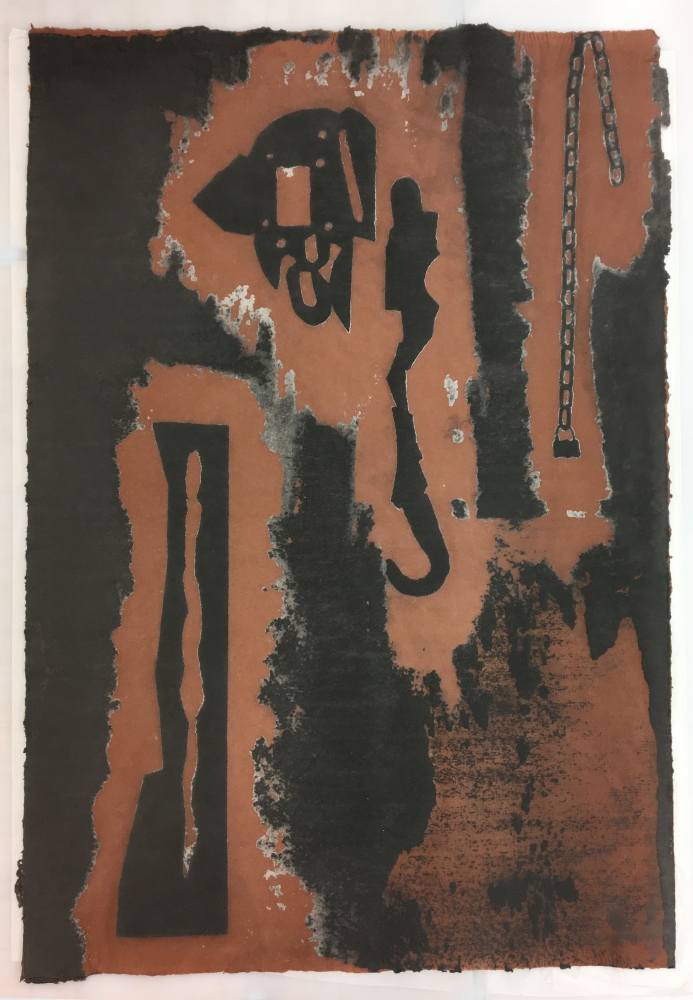 This show began with Hieronymus Bosch’s painting titled Cutting the Stone, or The Extraction of the Stone of Madness or The Cure of Folly. Against the backdrop of a bucolic summer landscape, the painting depicts a sinister scene in which a ‘surgeon’ wearing an upside-down funnel on his head extracts an object from the skull of a patient. Instead of the stone, what the doctor removes is the bulb of a waterlily, possibly an allusion to lust.

The exhibition develops upon our ongoing conversations with poet and scholar Jackie Wang. The themes of the show have been instigated both by the painting itself and by a text (featured below) written by Wang as a part of these exchanges. This text reflects upon the meaning of Bosch’s painting, among other themes of pain, desire, communication and the landscape of dreams:

What is the distance between well and unwell, between health and sickness, in a world that produces that distance, then sells you the promise of health, along with the false promise of the body’s ongoingness. It reminds me of an argument my little brother got into with his friend about healthcare. The friend was against universal healthcare on the grounds that the sick were undeserving, and “why should I have to pay for all those people who are in need of medical care because of poor lifestyle choices.” My brother tried to get him to see that he too was a sac of flesh that was gradually deteriorating, that he would one day occupy the condition that he spoke of with such disdain, would grow feeble and die. Perhaps his need to create a categorical distinction between the healthy and unhealthy, then claim the category of health as his own, was a way to inflate his sense of his invincibility in the face of a fate he could not integrate. It is a distancing gesture that props up the fantasy of the fully autonomous masculine subject, who is unaware of the labor–the chain of relations–that undergirds his existence.

“But for pain words are lacking.” Memory of pain–I lose my authority to speak of pain the moment I am outside of pain. But does speaking of pain only become possible outside of pain? Or does speaking itself place you outside of pain? Virginia Woolf wonders why pain is not among the primary preoccupations of literature. The impossibility of transmitting pain through the vehicle of language renders pain a dream: the project of describing pain is as futile as the act of trying to convey your dream to another. Having never visited the country of your pain, your dream–how can I enter it?

What is outside pain when in pain? People speak of pain as a prison the size of the body. Escape from pain: a body break on the scale of the invisible. Vague memory of living inside the burning house. Where does the medical meet the carceral, in a world where the irregular are reduced to coordinates to be regulated, despite the regularity of irregularity.

Does pain bind us to the social, or rip us from it? Individuate or concatenate? Binds insofar as the destruction of (the illusion of) autonomy stitches us to those on whom we depend, while simultaneously attacking our capacity for relation by commanding the full of our attention. Pain as a measure of the self in the form of the self’s undoing: the ground on which I stand has collapsed. The parameters of thought shrink to the size of “my” pain. But “my” is a misnomer here, as pain is often experienced as an invasion by something external, even as it emerges from within.

To whom one of these blows has happened: the half-crushed worm on the ground. “A sort of horror submerges the whole soul.” To have once been afflicted to live permanently in the shadow of the mind’s eclipse.

Medieval trepanning as proto-psychosurgery: Your ministrations are killing me.

Reversal of the direction of diagnosis in the antipsychiatry movement: society is sick. In The Extraction of the Stone of Madness by Hieronymus Bosch, the one who administers care is mad. The “stone of madness” that is removed is a bud–the removal of potential in the form a golden flower (or the sign of wisdom in alchemical texts). In the painting the doctor is sanguine. His authority is propped up by the nun and the monk standing to his right, watching the procedure. Who is the slack-jawed peasant in red pantaloons, who must be rid of the rocks in his head? A shell of himself, newly hollowed and staring vacantly into the viewer who shudders at the sight of what people can be made into by the charlatan who promises to deliver a “cure.”

His body is limp. He is tied to the chair so that he does not slide onto the ground at the moment the doctor drives the chisel into his head and he loses all bodily control.