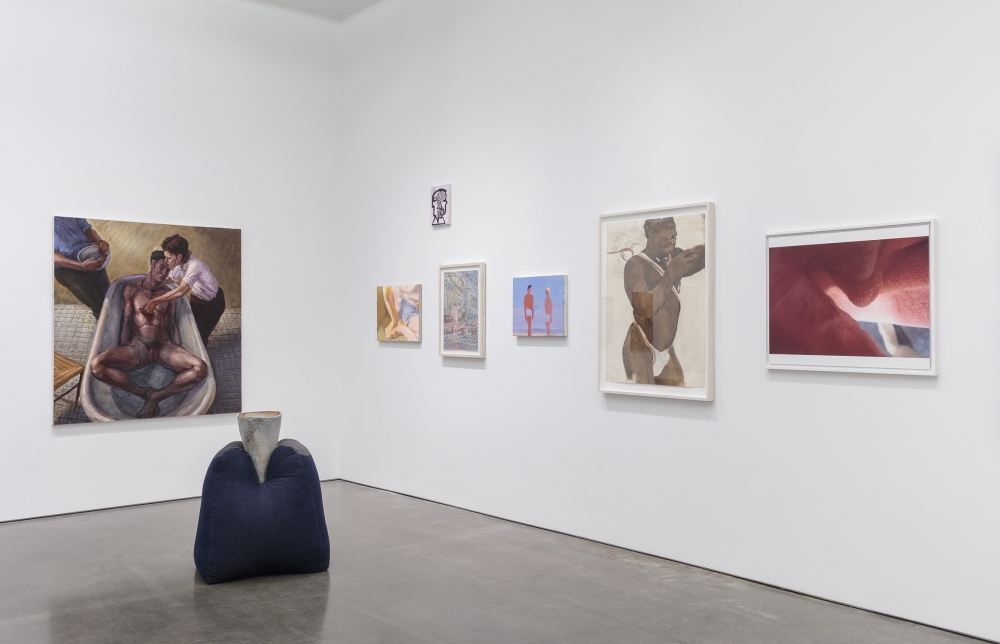 Yossi Milo Gallery is pleased to present more than seventy artworks in Intimacy, curated by Stephen Truax. The exhibition traces the presentation of intimate relationships over the course of forty years in painting, photography, sculpture, installation, and works on paper.

Intimacy focuses on the 1980s through the early 1990s, and the present decade, two key timeframes marked by dramatic social change: The former by the tragedy of the AIDS crisis, the latter by increasing public acceptance of LGBTQ-identified communities and medical advances in the fight against HIV/AIDS. In these two periods, the exhibition links disparate formal and conceptual approaches to themes of love, loss, and interrelation. From Paul Cadmus' drawing from the late 1970s, to works made for this exhibition, such as Kristen Jensen's site-specific ceramic and fabric sculpture, these works celebrate the seemingly unremarkable moments of everyday lives lived together.

Intimacy proposes that this group of nearly forty artists from both time periods turn inward to personal experience and to the expression of individual identity as a political gesture. Exploring complex relationships - sex, sexuality, and the body - and how those relationships are necessarily affected by intersectional identities, the artists are from widely diverse backgrounds across race, gender identity, age, sexual orientation and nationality.

While a rise in activist and protest art was evident in the late 1980s through the early 1990s, when artists addressed head on the AIDS epidemic and themes of identity politics the crises provoked, an emergence of quiet, intimate bodies of work, often depicting domestic settings, also rose in prominence. These more private subjects are featured in this exhibition.

Photographs from this period by Peter Hujar, Nan Goldin and David Wojnarowicz reflect their autobiographical experiences. Portraits by George Dureau and Robert Mapplethorpe expose the personal relationships each shared with his models off-camera. Jack Pierson and Lyle Ashton Harris elaborated on this strategy, making work just as probing and personal about their lives, loves, and queer experiences. These artists became key figures, inspiring the younger artists in this exhibition.

Figurative painters Patrick Angus and Hugh Steers, both active in New York in the 1980s-early 90s, dealt with overtly queer, domestic imagery; both succumbed to AIDS-related illness. Rob Stuart, whose portrait Angus painted in Stuart's own bedroom, wrote touchingly in his 1990 poem, "I sit for Patrick Angus": "To be undressed. To be sitting for a man / I loved. I was happy for this..." In Steers' painting, Two Men and a Woman, 1992, a woman washes a naked man suffering from AIDS while his partner looks on, capturing the agony of watching a loved one pass away. Both painters, though underrepresented during their short lifetimes, made work that became instrumental in queer figurative painting today.

As Angus and Steers were in the twilight of their lives, Nicole Eisenman was just emerging from art school. It was the groundbreaking work of artists like Eisenman who spearheaded a return to figurative painting in the current decade. Her explicit images depicting figures of indeterminate gender-engaged in emotional and sexual relationships, as in Lindsay's, 2016, on view in the show, paved the way for other young contemporary painters. It is on this trajectory that we locate the work of artists like Katherine Bradford, TM Davy, Louis Fratino, Samantha Nye, and Michael Stamm.

Parallel to the return to figurative painting, in the 1990s and 2000s, photographers like Wolfgang Tillmans and Katy Grannan created bodies of work that were bracingly intimate, and relied on the artists' personal relationships; more than this, they created relationships with their subjects for the viewer. Their work serves as touchstones (and even teachers) for the work of a generation of younger photographers like Elliott Jerome Brown Jr., Kia LaBeija, Elle Pérez, Bryson Rand, and Paul Mpagi Sepuya.

Not all of the works in the exhibition are set in domestic spaces; many works depict men gathering together in urban parks and forests, as in the 1979 infrared photographs of Kohei Yoshiyuki. Similarly, new works by young painters Elijah Burgher, Sholem Krishtalka and Doron Langberg all point to a special kind of intimacy gay men can find cruising together in the woods.

Other works in the show move beyond the strictly figurative and representational. Stephen Irwin, Christopher K. Ho and Kristina Matousch also address domesticity, but from a conceptual distance. Toward the end of his life, Irwin, who also died of AIDS-related illness, made exquisite images of loving embraces by rubbing out, or painting on appropriated pulp pornography. Ho offers Dear John, 2017, a large-scale laser-cut carpet installation decorated with heart emojis that support a cluster of 3-D printed glass blocks etched with a portrait of a young man; nearby, a small statue of a woman stares forlornly at her smartphone. Swedish artist Kristina Matousch's steel plates bear the marks of a typical domestic stovetop that was turned on, a deceptively simple gesture that is both violent and suggestive of caring for another in the home.

EJ Hauser, Jesse Wine, and Kristen Jensen create unique symbolic languages that point to relationships. Hauser inscribes ME + YOU, and YOURS into her paintings and drawings. Jesse Wine's tableau, Well, there's no accounting for taste is there, 2017, suggests a couple in repose on a sofa. Kristen Jensen designs her soft denim sculptures to support and protect a ceramic object, as if in a physical, bodily embrace. These abstract presentations of relationships - between the artist and subject, artist and viewer, and between objects in a single work - add to the diverse approaches to portraying intimacy in artwork being produced today.

Intimacy connects two specific art historical moments in which artists turn inward to their own lives and their intimate relationships as their subject. Just as artists did in the 1970s, and increasingly during the '80s and '90s, artists today plumb their life experience for their subject matter, and present it transparently. Their work is romantic, beautiful, and intended to emotionally move the viewer. This approach has been taken to surprising conclusions in the most recent works in the show. The exhibition also organizes an informal queer history, ending with a younger generation of LGBTQ-identified artists who can, unlike so many before, enjoy having older, queer mentors: those who survived.