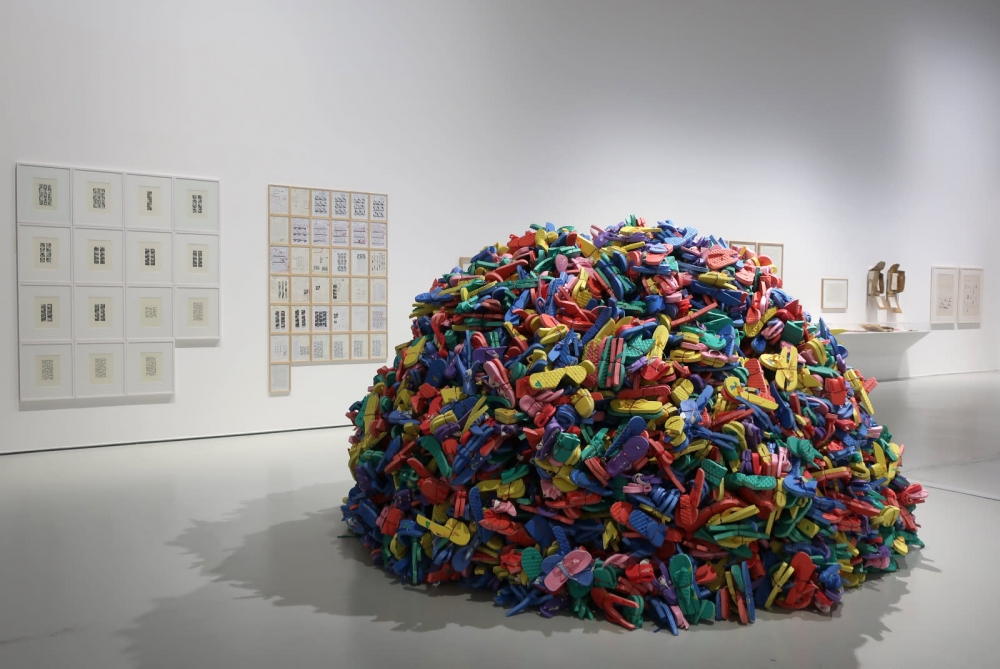 Hassan Sharif (1951–2016) was born in Iran and grew up in Dubai. Apart from the time he spent in London as a student in the early 80s, he worked in the emirates of Dubai and Sharjah throughout his life. Sharif is now regarded as one of the region’s most influential 20th century artists.

During his lifetime, Sharif created a complex and multifaceted body of work that includes drawings, paintings, performance pieces, sculptures, and installations. However, the title of the exhibition, a quote from the artist himself, suggests that his entire oeuvre can be approached as a single artwork, as his conceptual work revolved around notions of duration and repetition.

Sharif grew up in a time of social and economic upheavals, largely caused by the discovery of oil in the region in the 50s, the impact of which is reflected in many of his works. Sharif developed his critical voice early in life: from his teens until 1979, he published satirical cartoons about everyday life and politics in the weekly newspaper Akhbar Dubai. The exhibition includes a selection of these, along with several portraits and self-portraits.

Hassan Sharif wanted to make art accessible to the general public, not just to art experts and collectors, hence his early decision to work non-commercially, in the public spaces of the Emirate of Sharjah. He created his works out of cheap, everyday materials, or mass-produced objects acquired from markets. Art can just as well be made from plastic cups, cutlery, flip-flops, blankets, or cheap toys as from any other material–this notion reflects his critical stance towards the consumer culture that emerged in the Gulf region after the discovery of oil. Many of the works in this exhibition explore the evolution of the city and of consumer society.

The exhibition includes over 150 artworks, ranging from early satirical cartoons and documentation of performances in the Hatta desert to sculptural works produced in the last year of his life.

In direct reference to Hassan Sharif’s avant-garde and contemporary influences, the MAMC+ is showing two rooms devoted to the museum’s collection, focusing on minimal art, Fluxus, performance or Supports/Surfaces.