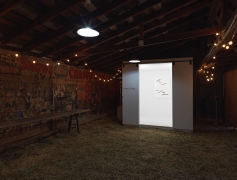 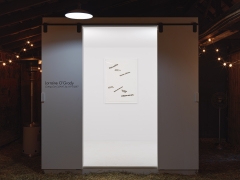 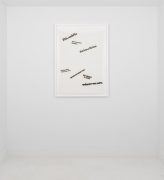 Cutting Out CONYT (1977/2017) returns to Lorraine O’Grady’s 1977 series, Cutting Out The New York Times (CONYT), which consisted of 26 found newspaper poems made between June 5 and November 20, 1977 from successive editions of the Sunday Times. Building on the successful transformation of public language into private in CONYT, in Cutting Out CONYT O’Grady repurposes the work to achieve a failed goal of the earlier series: the creation of what she terms “counter-confessional” poetry.

Cutting Out CONYT culls the original poems and reshapes the remains into 26 new works that adopt a form the artist refers to as “haiku diptychs.” Each of the haiku takes as its source a single poem from CONYT. Produced following a similarly rigorous set of rules as those that dictated CONYT, Cutting Out CONYT isolates and rearranges panels from the 1977 work without altering them in any way. Newly combined, the resulting compositions are eloquent in their brevity, while their printed, collaged forms evoke the materiality of the original series.

Reflecting on this new body of work, O’Grady writes, “I stuck to the idea of memorializing the original 26 weeks spent cutting out The New York Times, but not too literally. I did not take ‘one diptych per poem.’ I took only the best diptychs I could find since I was creating a totally new work, which had to succeed aesthetically on its own terms.” Her need to remake the poems had stemmed from a perception that they had been overwhelmed by process. Disconnecting and juxtaposing panels enabled her to create a more fully realized form of poetry. Concentrating and refining the voice of CONYT through the elegance of its haiku-like presentation, Cutting Out CONYT serves as a bridge between O’Grady’s early and later works. As she explains, “Making it has allowed me to maintain the tensions between my more explicit voice and my less explicit voice in a way that feels fruitful to me.”

These two voices, which O’Grady has alternately identified as “narrative/political,” "expressive/argumentative,” “inner-directed/outer-directed,” and “post-black/black,” inform all of her work. With the quip, “I was ‘post-black’ before I was ‘black,’” she characterizes her artistic trajectory from the 1970s into the 1980s as an evolution from producing deeply personal works imbued with her identity to more overtly politically-motivated ones. As a result, like its CONYT source material, Cutting Out CONYT references what O’Grady describes as “a diaspora mind, a diaspora experience.” And like other of her diasporic “new world” artworks, including Rivers, First Draft (1982/2015) and Landscape (Western Hemisphere) (2010/2011), this series is implicitly political. O’Grady expands, “Produced with 40 more years of life and aesthetic experience, I feel that it [Cutting Out CONYT] embraces the mysterious intertwinings of narrative and politics, post-blackness and blackness in a way that Cutting Out The New York Times could not accomplish or even imagine.”

Cutting Out CONYT engages with the counter-confessionalism of O’Grady's 1977 poems and transforms it via its diptych format into something distinctly other, refuting hierarchical binaries through its two-panel presentation—a recurring device in the artist’s work that insists on “both/and” rather than “either/or.” This structure allows O’Grady to question apparent oppositions between her voices while maintaining their productive tensions, setting her work in the interstitial space between the personal and political, inner and outer, post-black and black. Ultimately, O’Grady summarizes, “There was no extrication of the personal from the political, because these qualities were not opposites but obverse and reverse of the same coin.”