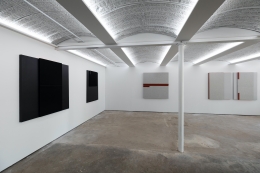 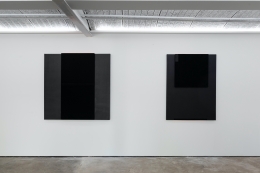 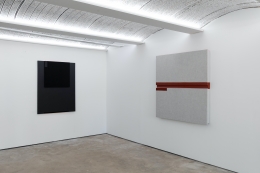 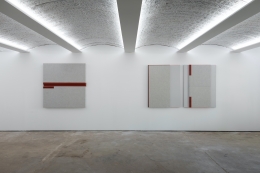 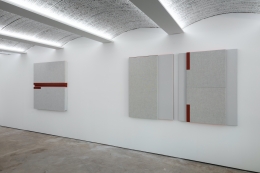 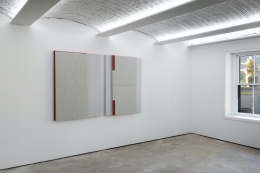 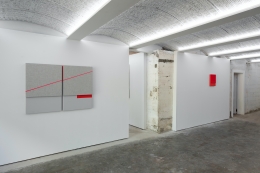 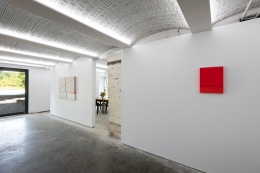 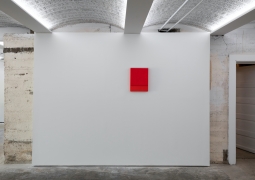 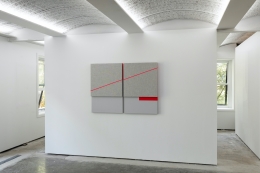 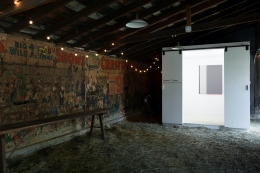 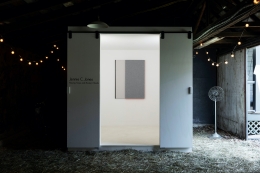 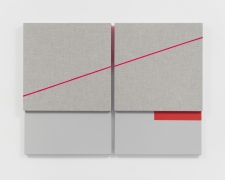 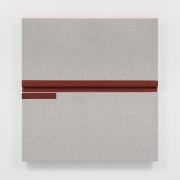 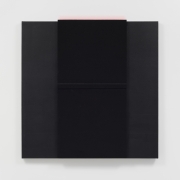 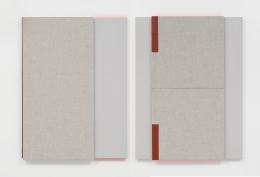 Alexander Gray Associates, Germantown presented Jennie C. Jones’ first exhibition with the Gallery, Passing Tones and Broken Chords. The show features new 2020 Acoustic Panel Paintings that further expand on the artist’s research into the sonic, honing her use of materials and approach to color and form.

In a departure from earlier black pieces, Tempo Grave (Marking Dark Time) and Tempo Largo (Marking Dark Time) incorporate painted acoustic panels into their compositions. Jones describes how the process of allowing paint to evenly soak into the fabric panels to create subtle tonal variations “…became an existential back and forth struggle...towards an impossible flawlessness.” Expanding on the considered nature of her works’ surfaces, she writes, “Underpainting is becoming more and more critical to my process. The layering with the ‘memory’ or passing time of previous brush work is apparent in the soft impasto and ghostly brush strokes embedded in the monochromatic surfaces.”

Like Jones’ Tempo works, the layered surface of Bright (Red) Gracenote (2020) also suggests the passage of time. The painting’s richly pigmented planes juxtapose painted felt against canvas, and recall Jones’ assertion that her surfaces “…are not flat if you move with enough deliberation, step to and from them as if within them.” Highlighting the labor required to create such effects, the artist ultimately challenges the connection between the reductive and Minimalism, characterizing her own Minimalist process as defined by “maximalist” techniques to erase her hand. As she argues, “The idea of lack can be turned on its head in order to be perceived as pure potential and opportunity. Perhaps this relates directly to African American improvisation and creative utility, to working inventively with spare means.”

Further capitalizing on the “pure potential” of her materials and evocatively spare visual language, in works like Fractured Crescendo, Red Rest (2020) Jones experiments with new applications of color. Foregrounding what she characterizes as a “hot” red acrylic, the canvas boasts a diagonal line of bright red paint across two acoustic panels. In contrast to this slashing introduction of color, Deep Structure (Oxide Rest) (2020) features uneven bands of darker red pigment that accent the channel between two panels. The artist explains, “The subtle lines inside the picture plane rather than at the edges are a way of almost painting the shadows of form, which is again a shift toward amplifying objecthood.”

Emphasizing objecthood, Jones’ painterly approach ultimately interrogates the legacy of Minimalism. “There are social and political ramifications to rejecting ‘subject’ and embracing ‘object’—as an African American woman, much more is at stake,” she concludes. “Minimalism becomes a radical gesture empowering a refusal to sell my narrative or bodies.” 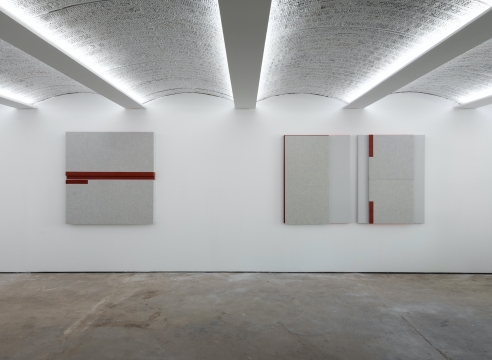 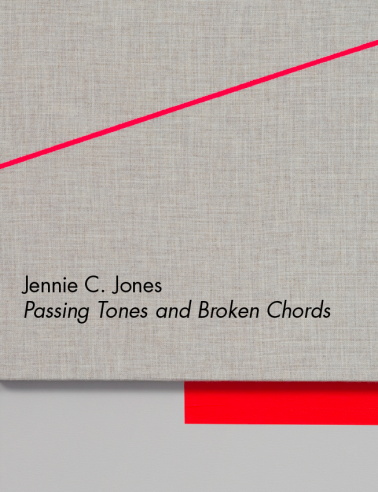