Alexander Gray Associates presented its first exhibition of work by Siah Armajani, featuring large sculptures, models, and drawings from the “Tomb Series” (1972–2014). The Series pays tribute to twenty-five philosophers, activists, poets, and critical writers who have been foundational voices to Armajani’s art and ideology, among them Theodor Adorno, Walter Benjamin, Dietrich Bonhoeffer, John Dewey, Ralph Waldo Emerson, and Walt Whitman. The Series embodies the humanist, democratic, and populist ideals that have defined Armajani’s multi-faceted vision for over forty years, culminating with the creation of his own tomb.

As a student in Tehran, and later a graduate of philosophy from Macalester College, Armajani was drawn to Western philosophers, writers and Persian poetry. Throughout his career, Armajani has built public sculptures dedicated to cultural figures, at times embedding quotes of writers and poets into his work. With the “Tomb Series,” as the artist explains, “there is no semiology, no quotations, no study of history nor biography.” The series of sculptures, drawings, and models represents a self-reflexive moment in Armajani’s practice. Paradoxically, the tombs invite, yet inhibit the viewer from entering each sculpture. Contrary to previous series that emphasized public and communal activities, the “Tomb Series” holds a more introspective nature while maintaining Armajani’s desire to distance his biography from the meaning behind his work.

Large-scale sculptures, such as Tomb for Neema (2012), references Nima Yushij the Iranian poet, considered to be the predecessor of modern Persian poetry; Tomb for John Berryman (1972–2012), American poet; and Tomb for Walt Whitman (2014), American poet and writer, incorporate elements of vernacular American architecture. The design of each tomb is symbolic recognition of the influence each figure had on the artist. In Tomb for Walt Whitman, Armajani pays homage to Whitman, while in Tomb for Neema, he honors Yushij’s radical poetic form that combines free verse and Farsi vernacular with standardized Farsi, creating poetry in a new way. In Tomb for Sacco Vanzetti (2009), Armajani pays tribute to Sacco and Vanzetti’s writings and activities as two innocent anarchists who were executed.

Along with large sculptures, the exhibition showcased Armajani’s drawings and models of the tombs, integral to the artist’s process, and in some cases serving as the tombs’ final conceptualized forms. One such drawing is Tomb for Hafez (2014), a Persian poet whose verses Armajani memorized as part of his early education in Iran. Armajani’s most recent tomb, his own Written Minneapolis (The Last Tomb) (2014), an 18-foot drawing depicts the surrounding neighborhood where his studio is located in Minneapolis. 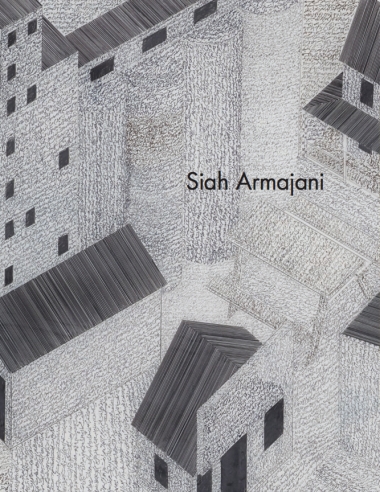