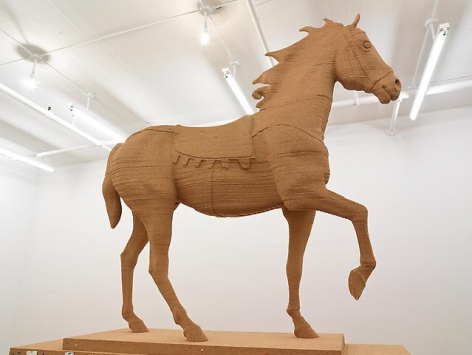 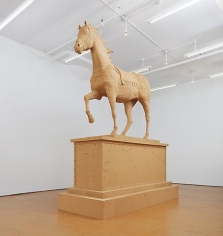 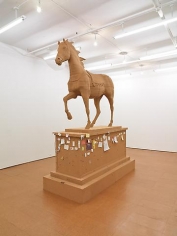 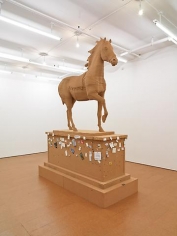 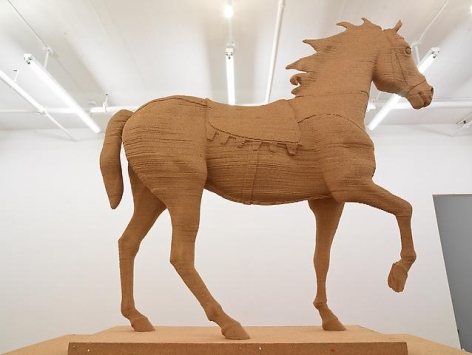 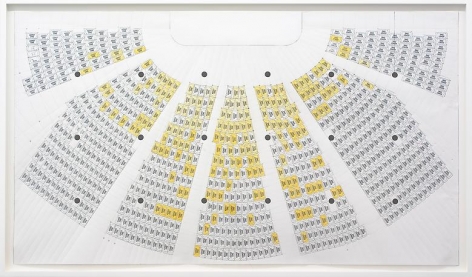 In recent years, Ramírez Jonas has been particularly involved with new forms of public art. For his 2010 Creative Time commission, Key to the City, the artist provided directions and keys for excursions throughout New York City; audiences enthusiastically navigated popular as well as lesser-known sites throughout the five boroughs, developing their own psychogeographic maps. Key to the City followed upon the heels of publicly situated sculptural installation from his Publicar series, for the 2009 Mercosul Biennial in Brazil. In these sculptures, public monuments made from boulders and brass plaques were re-imagined for public use; brass plaques were replaced with cork and push pins, allowing viewers to define what or whom to commemorate.

In the exhibition at Alexander Gray Associates, Ramírez Jonas presented The Commons (2011), a life-sized, 10 1/2-ft. tall military horse, built of cork. Modeled after the iconic equestrian statue of Marcus Aurelius at the Campidoglio in Rome, Ramírez Jonas' shifts the reference and form dramatically, transforming solid bronze to porous cork; historical specificity to open-ended narrative. The artist describes, “This is a monument, unusual in that it has no rider, unusual in that it implies the viewer. I use cork, because it is a material that can publish an endless number of voices, our voices. It opposes the singular voice of the State, or the singular identity of the ruler or hero normally portrayed on a horse, or the singular, immutable inscription on the public space that bronze and stone allow.”

Ramírez Jonas’ recent series of Admit One drawings further develops the idea of the constitutive body. On a graphite drawing that resembles an architectural blueprint of The Great Hall of The Cooper Union, small, tightly ordered stamps that read “Admit One” stand in for seated bodies. This proposal for an alternative site of political exchange, admits that while inclusion is sanctioned, the empty stage invites possibilities for a wide variety of public address and that the audience always outnumbers the speaker on stage.