Alexander Gray Associates presented an exhibition of paintings and works on paper by Hugh Steers (1962–1995). A figurative painter, the artist was diagnosed with HIV in 1987, ultimately succumbing to AIDS-related complications in 1995 at the age of 32. For the duration of his tragically short career, he created melancholy, yet radiant compositions of everyday life that documented the tragedies of the AIDS epidemic while celebrating Queer identity and desire. The Gallery’s presentation foregrounds Steers’ images of intimate moments between couples. Alluding to—but never directly addressing—the AIDS crisis, these works present viewers with ambiguous scenes of affection, companionship, and illness.

Steers was driven to paint couples in part because of his own need for companionship. Forced to contend with deep alienation, fear, and hatred as a result of HIV, he explained, “I would like to be able to act or have someone care about me the way some of the people in my paintings act or care about each other. It’s as if painting it will make it become real.” In White Satin (1993), Steers paints a man helping another man don a white satin coat. This scene, which infuses love into the devastation of AIDS, recalls the writer Justin Spring's assertion that the artist's work “suggests that … there’s a complex emotional conflict going on here: beyond mere anger, a lingering desire for something transcendent; below the outer layer of bitterness, a core of romantic longing.”

Further alluding to this core of longing, Two Beers (1993) features a couple sharing an armchair and embracing while Dressing (1987) captures a man observing his partner dress in drag. Ultimately transforming prosaic scenes and spaces into tableaux suffused with tenderness, Steers’ couples inhabit a poignant architecture of intense emotion. As the artist’s friend Julie Heffernan argues, “In a real way those characters were Hugh’s constant companions, avatars of love and friendship that every one of us needs in order to survive day-to-day.”

Symbols of love, the men in Steers’ paintings and works on paper nonetheless negotiate a complex world where they are continually forced to confront the vicissitudes of disease and their own mortality. Paintings like Two Chairs (1993) show men scrutinizing their faces for bumps or signs of lesions—indicators their immune system is compromised and HIV has developed into AIDS. Similarly, works on paper like Floored (1987), painted the same year the artist learned he was HIV positive, depict nudes sprawled corpse-like on the floor. Deeply personal, these vignettes reveal Steers’ own fears and experience as he bravely and unapologetically lived life and made art under the specter of AIDS.

About ADAA: The Art Show
Organized annually by the Art Dealers Association of America (ADAA), The Art Show presents curated presentations by the nation’s leading fine art dealers, providing audiences a selection of works from the late 19th century through today. 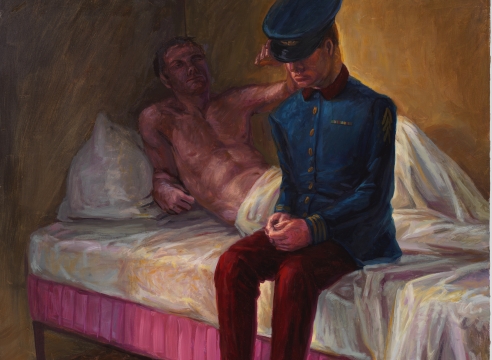